While I love all forms of gaming, Visual novels don't rank very high with me. I find them to be a linear experience and pretty much akin to reading a comic book with less panels. It's a genre that for me to really enjoy, it needs to have something extra thrown into the mix. War of the Human Tanks had a strategy aspect to it. Loren the Amazon Princess was a turn based RPG.

Which brings me to Recettear, This game has been on my radar for many years but I was always afraid to make the plunge but Steam sales being what they are, here I am twenty hours later and I loved every minute of it. Recettear takes the style of visual novels for its storytelling and throws in shop management and an extremely in depth dungeon diving/crafting system. 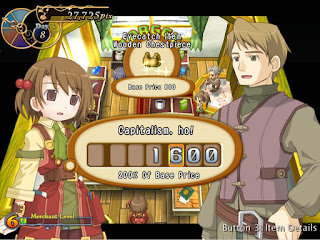 The games story is rather simple, one day a fairy named Tear shows up at your door.(Hence RecetTEAR) She explains that your father has disappeared/passed away and now all his debts have fallen to his daughter, Recette. Our main character is daft as a bird so Tear decides to help her run an  item shop so she can pay back her debt. Spoilers! You owe close to a million bucks in debt and have a month to pay it! Capitalism, Ho!

You will have to buy low, sell high, bargain, and pinch every single penny to be able to make all the payments in time. While it seems daunting the game gives you plenty of opportunity if you're smart.

Recettear is a cute game. When I say cute, I mean this is bubblegum and rainbows type of visuals, story, and mechanics. If you happen to be a fan of anime you're going to be right at home here, but those who are unfamiliar with the style may be thrown off by it. Just expect giant cute googly eyes , fairies, and plenty of over the top emoting. Obviously the game has an anime aesthetic when it comes to character design so I am not going to talk about that all that much. It's a 'you like it or don't' type of scenario. I thought the characters were well designed but general run of the mill fantasy anime stereotypes. Where things completely change is in the dungeons and shop management. 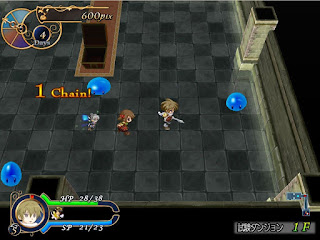 One very important thing to note is that the game is not in a 16:9 resolution. This like most other Japanese visual novels comes in a 4:3 aspect ratio.

Shop management is done in an over the top view where you can control our main character, Recette. The game really reminds me of Paper Mario where you are a flat RPG sprite running around 3d environments. Its really well done and gives the entire game a dynamic feeling. Your shop is your bread and butter. You will spend about half the game there. You can re-design your shop, re-arrange just about everything and place items to sell.

There is an atmosphere system that depending on how your store looks will attract certain customers. Lean towards gaudy and expect a couple shady people, design in heretical tones and maybe a demon might show up. It's something I really thought was great and wish it had been expanded upon more. There are only about two dozen people in the game to sell too. So don't expect it to get that deep sadly. 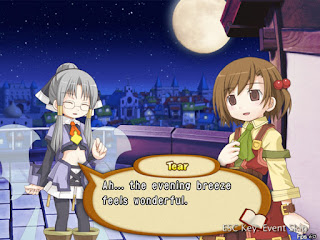 If you are a wise shop-keeper, the best idea is to get something for nothing and sell it at a high price. Enter the Adventurers guild where you can hire a character you've befriended and go into dungeons for rare treasure. This aspect to the game is almost in itself a whole other game. This is where that Paper Mario aspect really kicks in, except Recettear is all about real time combat. Which can lead to some moments where your depth perception is going to be thrown off. It's not a huge deal but it happens frustratingly.

You run around randomly generated environments battling monsters, bosses, and avoiding traps. There are a total of eight unique heroes that you meet throughout the story and some you can access playing in the games Endless mode. Heroes all have their own unique equipment, abilities, and different fighting styles which is amazing. The adventurers all buy their equipment from your shop, so its up to you to equip them properly. You can let them "borrow" items for a dungeon delve but that takes up valuable inventory space for treasure. Level progress is done in a survival of four levels and then a boss level, you have to option to leave at that point or move on for another five levels. 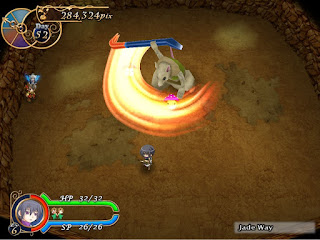 The entire dungeon system is really awesome and for the first part of the game is super useful. Things start to fall apart though nearing the final weeks of the Story mode. Most of the treasure in the first 3 dungeons don't scale up with the amount of money that you need to pay your debt. By the time you get to the final week where you owe 500k, you are hopefully dealing in sales around 20-70k per transaction. Where dungeon loot maxes out at 1-10k. The reason being, is that the developer wanted the end game content to be all about that shiny treasure you find and give you a reason to come back. Once you complete the initial story mode, additional dungeons are available that have upwards of 500k type of treasure. I understand to control balance, why this was done, but it doesn't make dungeon diving a rewarding experience in the later half of story mode.

As you progress through the weeks, you earn merchant levels that give you access to more crafting recipes, more customization options, and store expansions which allow you to put up more for sale. You earn merchant levels through successfully haggling with your customers. It's a rather awesome system and feels super rewarding when you sell that big ticket item you wanted. There are market fluctuations, trends, and people who will want to sell items to you. These market fluctuations are a BIG deal and the key to beating the game. Buy low, sell high. 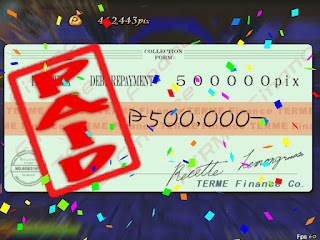 People selling you items is my BIGGEST gripe with this game. Imagine dealing with hundreds thousands of pix(gold) and selling antiques, magic weapons and armor and then suddenly someone wants to sell you a lottery ticket and haggle over the price. This happens quite often and by the end of the game If I bought one more dang cherry I was going to lose my mind. While customers gain more of a gold pool through successful interactions and earn trust levels. It would seem that the item pool that they draw from doesn't ever upgrade. Keep in mind, this is solely based off my experience in Story mode.

Aside from the minor gripes mentioned, Recettear is a fun and enjoyable game. It never gets dull to set up your shop just the way you want it and make oodles of money. Dungeon diving, while not super rewarding near the end, is far more complex and extends well beyond the end of the game. The item encyclopedia is robust and you could probably triple my game time trying to fill it out completely. Additionally from the Endless mode, you have New Game+ mode which is more or less the same experience except you keep all items, levels, etc. There is also a survival mode where the amount of money required to pay your bill keeps rising until you can't keep up. 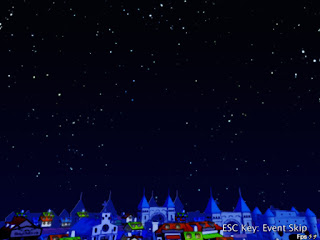 The game features controller support, delightful voice work and a jaunty little soundtrack that matches the tone of the game very well. The game doesn't have steam cards or achievements which is kind of a bummer. I can only assume this has to do with Recettear being translated for an English audience and not the other way around.

As mentioned earlier, I got about twenty hours purely out of story mode. The game has amazing replayability if you enjoy its mechanics. I got the game on sale for $2.99 which made the game worth it and more then I could have ever hoped. I still think the game is worth it even if you can't nab it on sale though. It's not a perfect game but its unique and innovative and mixes genres very well. I couldn't stop playing the game from beginning to end and there is still more to do to the games credit.

If you are in the market for a visual novel but want to stray off the beaten path, Recettear is an easy choice. It's bug free and really well made. If you find yourself a fan of the game, the developer is currently making a tactics style game. Check out the links above for that.

I wish luck to all the aspiring merchants and I leave you with this quote from Barack Obama. "Money is not the only answer, but it makes a difference."
Posted by Unknown at 6:09 PM