-Disclaimer- This preview was written during Early Access. Brawlhalla is subject to change.

Brawlhalla is a dream come true for some gamers. Fans of Smash Bros have always had to turn to a console to sate their chaotic filled tendencies. Brawlhalla finally brings things to the PC/Mac and makes it readily available to everybody. The combat is fantastic, music well done, each character feels defined. It offers multiple game modes, couch co-op, single player and possibly more on the horizon. Brawlhalla seems like indeed something that did come from the heavens and is here to answer all your prayers. However, like most things that are too good to be true, there is something going on underneath the surface. Perhaps a venus flytrap of gaming if you will, showing you its tasty gaming nectar and then eating you whole. What am I talking about? Let's go on a little journey.

The core of the gameplay is exactly what you want it to be. 4 player brawling action is brought to you with a multitude of character choices. Now unlike that "other" game, these characters aren't perhaps as well known. Matter of fact if you asked me their names, I couldn't tell you. There is the robot guy, ninja girl, alien dude, minotaur man, pirate guy. You get the idea. It's not that these characters are not unique, matter of fact they each look very different and are very well animated. Just for the most part it really isn't that big a deal when you break things down.

Each character comes with a set of two weapons and different statistical choices, ranging from strength, defense, and speed. Now each weapon itself has a certain power set, the rocket lance can blast you forward, the guns obviously have a ranged aspect to them, the hammer is slow but powerful etc. Characters share these items, the only thing that changes is the style in which the power-attacks are presented. While aesthetically this works, your character choice really doesn't change all too much when it comes to combat. I was just as good with ninja girl/sword then I was with pirate/sword. There are some attacks that are very different and then there are some that are exactly the same. The fact the characters are all more or less the same doesn't take away from the game too much. The combat is still fast, reactive, and fun. Just keep in mind the weapon sets are more important then the character flavor itself. Predicting what your enemies bring to table also is difficult because the ability to change your stats, this adds and takes away a little bit from the tactical nature of the Brawl style game. 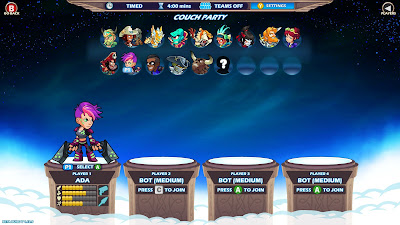 From there we launch into the levels and chaos ensues. The levels themselves are designed fairly well but nothing too exciting, mostly platforms in different positions. One level did feature moving platforms. I felt the levels need a dose of personality, hazards, traps, something to make them stylized and make them feel like as much of a character as the one you choose. Everything does blend well, the characters feel like they fit with the levels art style and everything flows well with the combat. The game controls easily, but it is probably is preferential to play with a controller, luckily the game does feature full controller support/rebindable keys.

Details of the game are fairly well polished as well. Music is high paced and decent, matching the style and themes of the game, although it is nothing too memorable. Thankfully it doesn't get repetitive. Sound effects are perfect and add that oomph you want when something explodes or when you crack someone really hard. Game modes are varied, although there isn't a story mode yet. You have a tournament mode, online, and even some in-game mini-games. This I liked quite a bit and would love to see it expanded upon. The options menu is a tiny bit lacking at this current moment in development but hopefully that will change.

So everything sounds great right? I would agree with you. Brawlhalla is a well done, action packed, competent game on Early Access. Lacking in bugs and online multiplayer is working well.(If you're US based.) Here is the catch, this is closed beta. Meaning that this game is eventually going to open up to everybody. Which means that Brawlhalla will be Free to play.(FTP) Which means one terrible and dreadful thing exists in the underbelly of this game. Microtransactions. 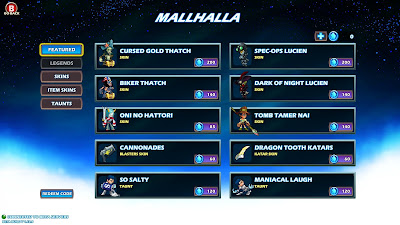 Mallhalla as its known, is the shop where you can buy all sorts of digital goodies. Now let me say I am not against Microtransactions. IF they are done right. I understand developing a game is not cheap and that there are bills to be paid and families to be fed. I am perfectly fine with everything on sale in the shop as well, all of it is cosmetic. Where Mallhalla begins to scare me is the huge gap between Taunts and Redeem Code. That could easily be filled with Characters, Weapons, and Levels. Which means you could be barred from using a new weapon set or new level, new character etc. There are plenty of ways that could all go sideways. Suddenly this goes from a fun brawl game, to pay me money to play with this toy. That might not be the case at all but it's something that should be kept in mind.

The prices of the micro-transactions themselves are also a bit wonky, if you ask me. Mammoth coins cost anywhere from $2.99 for 60 to $49.99 for 1000. With skins costing on average 140 coins that places the actual retail price at a whooping $7.00. That is quite a bit for a skin.(Although this isn't unusual in FTP games) While prices are not final and may change, this is still a scary example of things that are in the game right now. Start throwing in new characters and new weapon sets. Which undoubtedly will be higher priced then skins, suddenly this is a very expensive game. 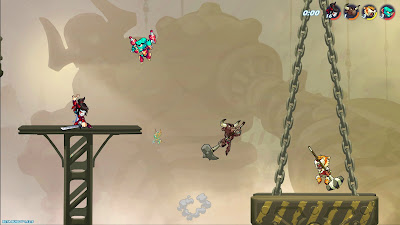 Now the developer has mentioned there will be an in-game currency that can purchase the items in the shop. Those have yet to be implemented at this point in development.

Brawlhalla is a promising game, one that I hope doesn't fall prey to greed or bad decisions. It is not a clone of its inspiration and competition. Deviating in some features/mechanics that are for better or worse, Brawlhalla captures that one magic element, fun filled chaos. Giving you massive amounts of replay and letting you play with your friends. The game has a bright future, long as that mico-transaction element is handled carefully and they listen to their community.

I will keep a watchful eye on Brawlhalla as development continues and it moves into open beta. More servers are added to expand the multiplayer. There are still many things that can be improved upon and hopefully those prices change a little bit. The little Smash player inside of me is optimistic, I hope he doesn't get knocked out of the board in one smash.