DISCLAIMER: This game is still in Early Alpha. All thoughts and opinions herein are related to the game during its development state. Features/content are subject to change and this is not a final representation of the game.

Laser Swords humming, my left arm has been cut in half. Two foes coming in from both sides.  What do you do?(No pun intended) One foe is unwise to swing too early, leaving his head on the floor as I slide by with a swish of my sword. The other isn't so easy but a quick kick sends him flying backwards over a ledge. I jump as the robot crowd buzzes with excitement.(on the inside) My foe looks up only to see my sword coming down on his body chopping him in half. I stand there Lea Norton a sixteen year old marketing manager has won glorious victory!

I can't name many games that really deliver an experience quite like the one I described. That is just ONE round in Clone Drone in the Danger Zone. 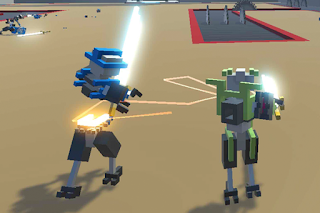 Aside from having one of top ten most epic game names I have ever heard, Clone Drone is a fast paced action game that you need to know about. Now if you are anything like me you love two things, robot carnage, and fun dueling mechanics. I am happy to say that the Early Alpha delivers on both those very effectively. The combat is simplistic as is the graphics but there is quite a bit of complexity here that lay beneath the surface.

Mechanically is where I was the most impressed with this particular title. The sword combat honestly reminds me of Star Wars Jedi Knight: Jedi Academy. Where you are constantly pivoting, and dancing around your enemies and swinging your sword hoping to get that perfect shot. Clone Drone throws in gladiatorial combat and dismemberment, where every round damage is transferred to the next round. Lost a leg? Your going in to the next round with one leg.

There is also bows, traps, jet packs, and a whole skill tree to progress through creating different tactics/builds that you can try. The beautiful part is this is only the beginning as more is hopefully added as the game develops more. Adding in more weapons, more sword fighting styles, and more crazier enemies just makes me giggle at the idea of what this game can become.

As of right now there is a bit of a story mode which hints at the possibility of more then just the current arena combat. I am cautiously optimistic as the arena style gameplay seems a great setting, so taking it out of that setting might be strange but for now we will have to wait and see. There is also an endless mode if you just wanna see how far you can get. Plenty of fun surprises and good level design waits in this mode. Lastly, for all you Twitch lovers out there is a dedicated mode just for that which I didn't play around with all that much. I think there is fruit throwing involved?

While the graphics are simplistic, I think it lends itself to the robot chaos and blends beautifully together once you really get into the fray. There is plenty to love about the alpha as it stands right now. Obviously I encourage my readers to support Indie games and especially Clone Drone. I feel comfortable with the state of the alpha as a purchase alone. It's easy to play and very entertaining game that you won't regret purchasing. If your not convinced then I highly recommend at the least keeping your eye on this title as it develops!