When I started IndiEvaluation, I had three things in mind. One, I wanted to sharpen up my writing skills and write honest reviews even if they were not always very nice. Secondly, I wanted to have a way to deal with unrequested games that came through my email, I feel all games deserve a chance no matter the packaging. Lastly, I wanted to be able to write and review games that I may have missed. One of those games was Richard & Alice. It was written by the same minds behind The Charnel House Trilogy. These writers know what it means to go into dark areas of the mind, where the lines of morality are blurred and things are just messed up in general. Needless to say I was excited about this game and I wasn't disappointed.

Broken down into its most basic parts, Richard & Alice is a point & click adventure game with familiar pixel art style graphics. You click around the environment and mix items in your inventory then try to apply them to the surrounding in hopes of moving forward. You left click to move and interact with objects. It's a very simple game and from the look of it, you might pass it up. It's visual style is not bright or cheery or really eye catching whatsoever. The options menu is non existent and things like resolution control are frustratingly absent as well. The only thing you can really do is save and load a previous game. (This function is EXTREMELY important, more on that in a bit)

Far as gameplay goes there are minor issues, walking is abysmally slow. The game takes place in a sort of forever blizzard, when you would think the character would want to pick up the pace. The characters move sluggishly across the screen, which is a problem because there are some large open areas in the game. There are also a couple of times little direction is given. While this isn't a major issue throughout most of the game, there is a key moment where a solution for a puzzle probably requires a walkthrough or thinking like MacGyver. To be brutally honest from the way I write about the gameplay you might think I wouldn't recommend this title. You couldn't be more wrong. Does the game have technical flaws? Yes, but passing this game up would be a huge mistake. Where Richard & Alice shines is in it's chilling story telling and presentation. 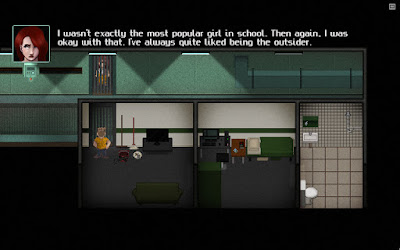 Now I am going to spoil the story for you a little but let me start by saying this is a very mature themed story. This isn't light and fluffy, matter of fact I was kinda depressed by the time the game ended and the credits began to roll. The basic story starts with a man, Richard, who lives in this high tech underground prison for some sort of crime. He has been here quite a while when suddenly the cell across his gets a new tenant, which happens to be Alice. Things start off amicably enough and they begin to share their history and more importantly, their crimes. This begins the twisted tale that shows how one life can be affected and completely destroyed by other peoples actions.

The universe that Owl Cave created is haunting and full of this suspenseful dread. You know there is something wrong beneath the surface and it's only a matter of time before the terrible truth is revealed. Yet, there is still a silver lining in this dreary snow filled world. This story isn't just about the horrors of humanity, but the perseverance of the human spirit as well.

Well, that also depends on which ending you get. Remember that save function I said was so important? The reason that it is so important is because Richard & Alice features five different endings. These endings are decided by subtle things you as the player decide to do and interact with. So saving often is key especially if you want to get all the different endings without having to restart five times. 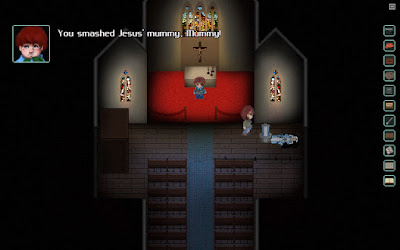 Now while that may sound like plenty of replay value. It kinda isn't. The story still flows more or less along the same path and dialogue, you just get a different outcome. If you are somebody who doesn't mind that type of thing though, go for it. The fact still remains that this is first and foremost a great story. Suddenly the dreary pixel art has a reason. The colors are muted on purpose. The music and sound effects all play into the atmosphere and sense of dread that forms while playing the game. This is what Richard & Alice excels at and is its primary selling point. A certain scene where Alice is standing in front of a grave left me haunted, even despite it being simple pixel art. The image was powerful and I felt everything that was conveyed in this universe in one scene. 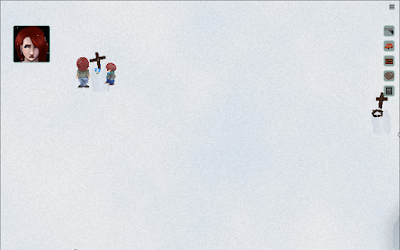 The music and sound of Richard & Alice is also superbly done. The tone of the music drives into your head that everything you know and love is gone. I wouldn't exactly call it music that you want to listen to but it builds the scenes and adds much needed character to all of the environments. Scenes as simple as walking through a door are tension filled because of the utter silence that follows from the snow beating down. There are some scenes in the game that could've used a bit more, but for the most part the sound effects are handled well. I think this game would've been enhanced so much by voice acting but that is just wishful thinking.

The only thing I will warn you about is that Richard & Alice doesn't feel the need to answer every single question. Matter of fact as of writing this review, I reached out to the developer to see if I could get some answers to questions that are still burning in my mind. Who was in the confession box?! Ahem, but I digress, if you are the type of person who needs all the answers, this may frustrate you as the story reaches its climax.

To sum, is Richard & Alice a game changing innovative game? Not really. It uses the elements it needs to get the story across and that's about it. It's a great story but some technical areas of the game still need polish and aren't likely to get them. I still loved this title and the story stuck with me far after I completed the game. The game can be beaten in just about three to four hours and it is completely worth it. Coming in at $5.99, it isn't too bad for your pocket book either. So keep warm, watch your back, and tell me who the hell was in that confession box?!