OneShot is a game that doesn't shy away from breaking the fourth wall. It harnesses my love for games that mess with your head and play with the conventions of game design. Games like The Charnel House Trilogy or Richard & Alice are clear examples of these types of game.  Unlike those titles though, OneShot takes it to a whole other level.  To say the least, OneShot has some really innovative ideas that go outside the window, literally. 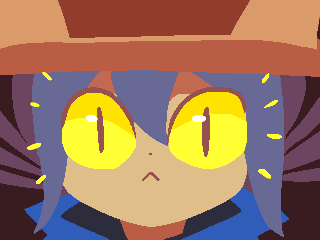 OneShot plays with deep concepts such as life, sacrifice, morality, and the environment. It's easy to see why the rabid fan base is quick to compare this to a game like Undertale, especially given the childlike innocence with which these topics are approached. It hits the heart in just all the right places. While I don't want to get spoiler heavy, as the games primary enjoyment comes from its story, I will outline the basics. In the game you help Niko after he mysteriously wakes up in a world with no sun. Niko doesn't know how he got there but he does manage to find a light-bulb that magically illuminates in his hands. This begins his long journey. A journey that will take him all across the world. If there was a way to describe this journey it would be like a Miyazaki film. The entire adventure feels unnerving but beautiful all in one breath. It propels you to an ending that leaves you questioning more about the world, more about yourself and the decisions you made.

Mechanically OneShot is simple, there is no battle system to speak of or anything really all that fancy. This is mostly a straight forward narrative game. There is an inventory system that lets you combine items to move the story along. You've seen similar systems in point & click games. The real interesting part comes when the game suddenly jumps into windowed mode. Once in a while you will come upon a puzzle that requires you to, "think outside the box." 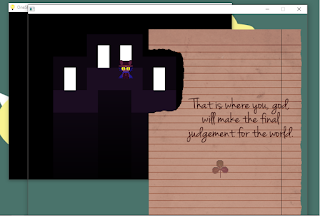 These puzzles usually involve some sort of outside factor that actually isn't in the game itself. One puzzle might have you hunt down a file for instance. One of my favorites is the one that has you matching symbols to progress in a maze. It's very cleverly done and its something you have to experience to fully understand. Explaining it doesn't really do it justice. That sums up how I feel about OneShot in general. The experience is what makes it great.

If you are looking for extremely difficult puzzles, this isn't the game. It will make you think logically, but I didn't find it to be mind blowing in difficulty.

To back up the storytelling and puzzles, the game has an equally unique art style. Now keep in mind this is an RPGMaker game so it's pixel graphics, but that never holds the game back. At key moments the game also has these beautiful cut scenes that really draw you into the moment. 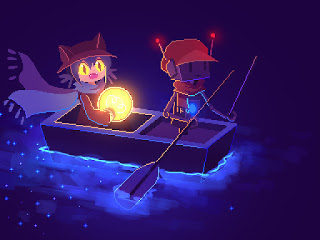 As you travel, each area has its own color palette and theme ranging from factories, forests, and the city. The world is dying, so OneShot has to balance its dreary setting but maintain a level of pleasing aesthetics. It accomplishes this with bright colors contrasting very dark backgrounds. It's quite effective at building the mood of the game. One area that does deserve mention is the characters sprites, which are fantastic!

The music of OneShot is also exceptional as well. Again, all playing into that creation of atmosphere that this title is based around. I personally enjoyed it but didn't find any particular track that piqued my interest. It got the job done, which is all that matters. Same with sound design. If you find that you love it, then FYI, the developer is releasing the OST soon for purchase. 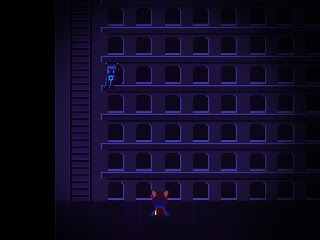 The game can take anywhere from two to four hours on your first play through. If you read every scrap of lore, book, and investigate every nook and cranny. Once you do beat the game, there is a new game plus mode that unlocks. This area is the one I have the an issue with. Certain things were not finished in the first playthrough and are left unanswered no matter what you do. The new game plus practically tells you that things are going to be different and tells you to play again. This is sadly a bit of smoke and mirrors. My second playthrough was an hour long and I counted about five things being all that different.

The content isn't, as of when this was written, in the game yet. So hence the minor gripe I have. The end more or less leads you on. It could be far worse as certain players have gone as far to play three or four times looking for anything, to no avail. Despite that, the game is very enjoyable, the first playthrough is by far going to be the best. The puzzles don't change so the challenge is eliminated at the second playthrough. 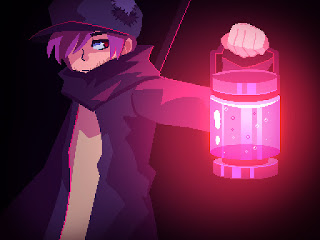 Of course the developer is still actively adding things to the game so this is bound to change and I am very curious as to what awaits behind certain doors. Perhaps forgotten heroes? You know what I am talking about OneShot fans.

To wrap up, games like OneShot are what make Indie games so vitally important and amazing. They innovate, they have creative stories, and we need more games like it. I really enjoyed OneShot and hope the developers only grow from this and make bigger better games. Coming in at the low price of $9.99 this game is worth every single penny.

I gladly recommend this game and if you love narrative driven games then you need this in your library.
Posted by Unknown at 7:06 PM