DISCLAIMER: This game is still in BETA. All thoughts and opinions herein are related to the game during its development state. Features/content are subject to change and this is not a final representation of the game. 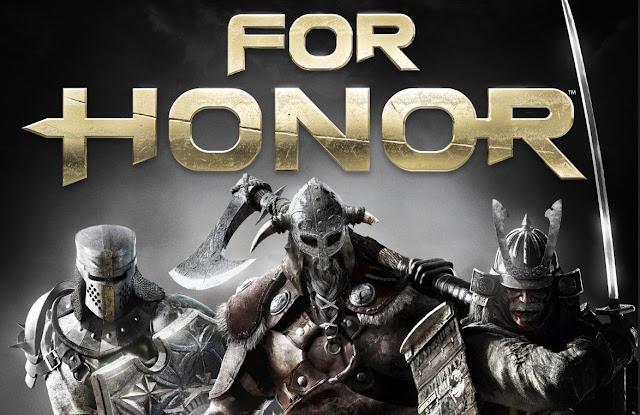 It's almost here, Ubisoft has lifted the veil on its medieval warrior mash-up, For Honor. If you were lucky to get into Beta that is and had a decent internet connection to handle the whopping 22 gig download. Now I will admit I came at For Honor with a bit of tepid excitement, I wasn't expecting much. What I found did impress but found the usual Ubisoft tricks at play and even a couple of issues when it came to gameplay.

Like the vikings in For Honor, lets just charge at the main feature of this game, the combat.  The current nine classes that are available are utterly fantastic, and all varied in their combat styles. I was completely blown away how each class has their own strength and weaknesses. I personally fell in love with the massively muscled Conqueror, who is a morning star/shield wielding Knight of destruction. With a combination of heavy attacks and unbreakable shield bashes, this class is a beast and it shows.

Then the Nobushi came around and knocked me flat on my ass with her long spear and poison attacks. I was so utterly dazzled by this classes grace and elegance in combat, that it quickly became my second favorite class. There are many classes that I am sure will just speak to people in a certain way. This is the beauty, and main thing I took from For Honor. I can only imagine this will be enhanced when the final classes are released. 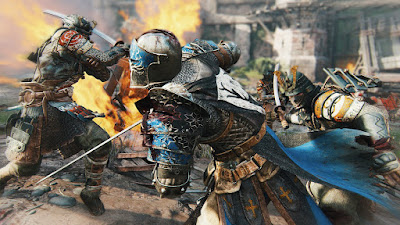 For all its sword clashing, gleaming armors and deep combat, For Honor has many ways to completely undermine its own combat. Its like putting a Picasso above your toilet, its maddening and infuriating. Let's start with For Honor's many, many pits/cliffs/small falls/ladders. For some reason a man fully clad in plate-mail armor can't handle a fall of ten feet. Resulting in instant death, this quickly became an easy tactic and felt stupidly easy to apply. While I understand the argument of this being a part of tactical environmental awareness, it comes off goofy when people are stacked up on the bottom of ladders because one guy trolled and punched you in the butt.

While there are ways to avoid fall deaths, I still don't understand the numerous spots Ubisoft put in maps for this to occur. Completely undercutting the great combat for essentially what is a fighting games 'Ring out'.

The Dominion match type is the big 4v4 and likely to be the main draw for players. This is where all earned customization items take effect and its the only thing that is any different currently. This game mode is more objective based and requires capturing and holding of points and usually a middle battleground that requires pushing of conscript fodder solders to establish a line. Now while this mode definitely has its high points and can be very entertaining, this all quickly devolves, resulting in many situations where you will gang up on enemies or find yourself on the receiving end. The current Revenge meter is their solution, which gives you limitless stamina and a small health boost. In my experience, it didn't help anyone I killed or me for that matter.

It's a game mode far less about skill and more about just being at the right place at the right time. Your mileage may vary mind you. What I was impressed by was how quickly the tables can turn in this particular mode, even if you are far in the lead. The enemy team can rally and pull out a win rather easily if fate sides with them. Despite that, Dominion is a bit lackluster of an experience. For Honor is game that definitely needs more game modes. Another thing that can POSSIBLY spoil the game is Ubisoft's micro-transactions. 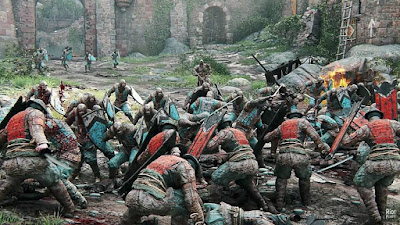 In the game there is a standard in-game currency that can be used to purchase item packs.There item packs are effective only in 4v4 matches(Currently), The more you spend the better quality items you can get ahead of the pack. These effect stats like damage, stamina, etc. Now while there is no way to currently purchase that currency in the game, Ubisoft is more then likely to translate this into some sort of scheme for a quick buck. Making a scenario where its possibly a pay to win game mode. As there are only three game modes that eliminates an entire game type if you enjoy skill over cash.

Keep in mind this isn't fact quite yet but given Ubisoft track record of cramming micro-transactions into anything. I wouldn't hold my breath.

Don't get me wrong, I know it may seem like I have more complaints than anything good to say, but I enjoyed the Beta. For Honor is incredibly exhilarating and the combat is utterly amazing. We just need more game modes, and for the love god do something about the falls.

Oh and I can't write an article about For Honor without mentioning the always on feature. As far as this writer can tell, there is absolutely no reason for it. The constant three faction struggle is a joke and utterly pointless. Especially given that you can play any class with anyone else. You earn points for your faction based on performance. The points can used to make a map in the background a different color that doesn't change anything in the actual game.

To wrap up, I do wanna mention that the game has amazing customization options. You can get random pieces of gear at the end of matches. Sometimes you get nothing, which is disappointing. For Honor is a new type of fighting game and if its success mattered in that alone, then it succeeded. I never got tired of the combat. It just needs more to take it to the next level. Which hopefully Ubisoft delivers on. This is a Beta after all. People who played Chivalry will feel right at home here and love this game.

I just want two things added to this game. One, pointless war screaming as I run across the battlefield. Two, I can't wait for this game to have a cross over with Deadliest Warrior. Anyone remember that show?