Fearless Fantasy is a RPG that seemingly tripped, fell down the rabbit hole and landed somewhere in an anime universe. There are strange creatures, over the top dialogue, and some interesting reactive based combat. One thing I will say about Fearless Fantasy is it doesn't really hold back, it wears what it is on its sleeve. This is very obviously meant for a mobile device but nonetheless finds itself on Steam. To be frank, Fearless Fantasy is like a funny tasting alcohol, it is unique but definitely an acquired taste. One that certain people may like, others not so much.

The reason for that is Fearless Fantasy goes against the grain in most regards of traditional RPGs. The art style is what caught me off guard the most. The monsters in Fearless Fantasy are not your typical, orcs, goblins, and oozes that we have all grown up with. These nightmarish creatures seemingly stepped out of a Dr. Seuss book. With strange vibrant colors and wicked smiling faces coming out of other wicked smiling faces. This sets the tone for the game and lets you know that this isn't your standard RPG. On top of the onslaught of twisted creatures, Fearless Fantasy has a bit of an anime edge in the character design.

The story of Fearless Fantasy is very simplistic and very light on plot. There is a Princess, Hero/Mercenary, evil fiance, giant monster that can eat everybody. It's story, in my opinion, is not really the main focus but it is present and quirky. In between missions you are occasionally gifted with slight animations that give some personality to the characters. The characters have a light-hearted tone that is reminiscent of anime, this makes the characters seem somewhat vapid in nature. This will throw some people off but I didn't mind it all too much. The scenes are voiced acted well but sadly they lack any color, which takes a bit away from the scenes and also some footage is reused in certain situations.

To shake things up even more is Fearless Fantasy's combat. Again this is where this game holds its heart on its sleeve. The combat is completely meant for a mobile platform, you poke, swipe, and swish for all your abilities and attacks. On the Steam version, your mouse replaces your finger and this is quite jarring at first. I love the idea of the combat system as it keeps the player involved in a way that traditional turn based RPG's don't. If you miss an attack there is no one else to blame but yourself, if you critical hit, you did well. Where the problems begin is that there is no time given for you to practice your skills. You essentially learn the combination of swipes and taps as you play. This leads to wasted attacks and some grinding just so you can figure out what you're doing. On higher difficulties? Forget it!

While I cannot comment on the mobile version of the game, I can say that on PC the mouse feels somewhat clunky in combat. Lacking the swishing grace that a finger has as the attacks get more complicated and faster as you progress through the game. There is other minor issues with combat, while the tutorial does explain the basics. Things like enemy status ailments are never explained, it was only until my fifth mission I realized I could click on my party and see what the negative buff was. Despite the issues though the combat can be fun and highly reactive. I should mention there is also a shop with items and upgrades. The shop fills in the required RPG aspects and gives that grinding a point, and lets you spend gold. 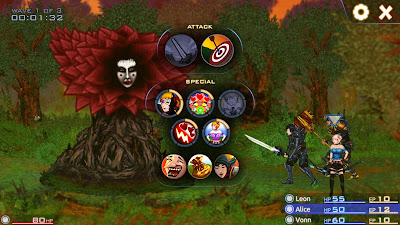 Other areas of the game do what they can for being a mobile heavy game. The options menu is somewhat bare. The map which contains your levels is drawn well but static.  On the other hand, the audios of Fearless Fantasy are fantastic. The music never got dull for me and was exciting and fun when it needed to be. The sound effects having the necessary oomph when a critical hit landed or swish of a dodged blow. The attack animations themselves while eventually repeated, looked fantastic the first time I used them. Dazzling the screen with effects I wasn't expecting.

Replay value and length are up to the player. The game includes the standard 3 star achievement hunt. This is divided by difficulty per area/scene of the game. Increasing the difficulty of the reactive combat. This feels a little grindy but still adds welcomed replay value. The story mode can probably be beaten in about two to three hours. The higher difficulties will take much longer. 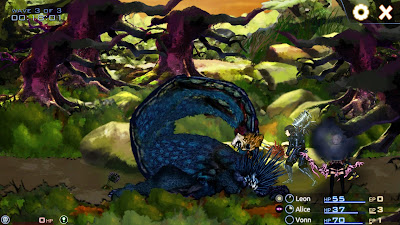 To sum up, Fearless Fantasy is not everyone's cup o' tea, but I was surprised and interested to see how different the game was. I think some bold moves and design decisions were made here and I think the good far outweighs the bad. Even if you're not a fan of the art decisions and story. The combat is unique. I would love to see what this kind of combat could be like in a dedicated PC title and made a little bit more friendly for the mouse.

As always I encourage you to do a bit more research, but the game isn't overwhelmingly priced at $6.99. You could always catch it on sale but I think the game offers more then enough even at its base price. Especially if you are looking for something that dares to try something a little new and a little weird.