-Disclaimer- No actual sheep were harmed during the course of gameplay. I think.

If you would've told me a day ago that I was going to play a game all about math, division, and adorable little animals being cut in half, I would've called you crazy. Even more so for saying I was actually going to ENJOY it, of all things. That was yesterday. Today we have Divide by Sheep, a hilarious little puzzle game that is full of charm and some very challenging puzzles.

Now I feel before we move any further, we should really note something. This title is extremely App friendly in design. If you are somebody who gets easily bugged by that type of thing, you are going to grind your teeth as you gain 3 stars and see a complete lack of options menu. With that aside, I love Divide by Sheep. The game is disguised beautifully, but its all about math and putting numbers in the proper order to get the outcome you want. Using sheep, pigs, wolves, lasers and more, you will send the adorable little animals on their voyage to the hands of Death.

That's right, Death is lonely and wants a friend, but I mean Death is adorable, who wouldn't want to be his friend? 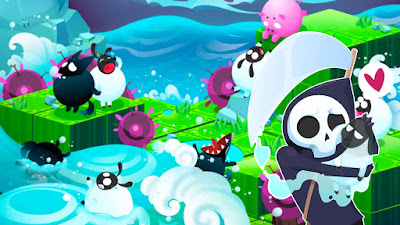 Small plot aside, the aesthetics and charm of Divide by Sheep is what got me hooked. This is incredibly important aspect to the game, otherwise it's just a math puzzle game. The dark humor is what kept me smiling, even when I got frustrated. So much so as a matter of fact, that if you are not a fan of math, you may not enjoy this title as much. You must bounce sheep or an assortment of animals to a raft that requires a specific number. Sometimes it's easy and sometimes it can be incredibly complicated. The difficulty scales rapidly and there have been more than a few times that Divide by Sheep has made me scratch my head and made my eyes go cross. More elements are introduced to complicate matters, such as limited number platforms, wolves that eat sheep, laser grids that divide sheep hilariously in half, and bouncing platforms that send your helpless animals flying.

That isn't to say that Divide by Sheep is too hard to beat or play though. If you can match just one of the numbers you are allowed to progress to the next level. Getting stuck is never an issue, and the challenge is one you set on yourself. Go for three stars or just say screw it and come back to it later, just like a real math test. Divide by Sheep has a large assortment of levels all with the 3 star challenge. The aesthetic of the levels does change from grassy halls to frozen tundras but for the most part, level design is always the same. Some floating platforms, which is your puzzle, and a raft to put X number of animals on.

On occasion after beating a number of levels, you are rewarded with an adorable piece of art, that usually explains a new up coming element in some manner. 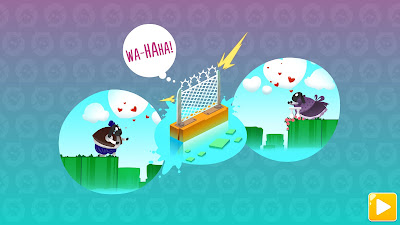 It really is hard to find a fault with Divide by Sheep, because it's a very simplistic game. That in itself may be an issue though, because sometimes lets face it, math sucks. Mind you, this is why I'm a writer instead of a Architect or something that actually pays. But I digress. The point is, if Divide by Sheep had a fault it would be that it's a one trick pony. It doesn't exactly claim to be anything else than what it is, so this isn't a fault to the game. You should be more than aware what you're getting into if you buy this game. Aside from that and the App like nature of Divide by Sheep, it's bug free and is very fun to play. The replay value comes from trying to get 3 stars on every level, which unless you're very clever, is going to be long and challenging.

The options menu for the most part is non-existent, however there are parental controls if you wanted to leave the messy parts of the game out, like sheep being cut in half and leaving bloody messes. This feature while not incredibly important, is rather nice to be included and makes this game also a great learning tool. The music and soundtrack of Divide by Sheep are absolutely adorable and jaunty, matching the games almost carefree tone. It never really got grating on my ears or did any painful repeats. The music changes from area to area of the game thankfully so there is always something new to listen to around the corner.

I have played plenty of puzzle games but none that actually made math fun for me. I am not huge fan of Sudoku or other games of its nature. That in itself is an incredible compliment to the games level design. After being stuck on a level for a while and finally beating it, you get the "aha!" feeling that is quite addictive. Divide by Sheep may not be incredibly innovative but I haven't seen many games like it. 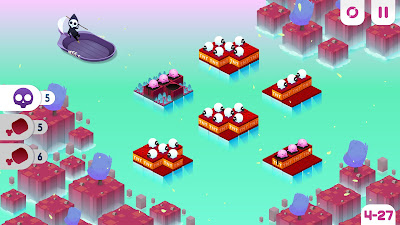 There are some areas that Divide by Sheep could've added a little bit more to make the game user friendly. There is no hint button or any hand holding whatsoever, so if you bang your head against the wall, you are heading to Youtube or a forum for help. While there is a quick start over button, a undo last move button would've been very nice for some of the more complicated puzzles that involved many steps. While these puzzles are rare they do happen, and having to start completely over again left me a little wanting.

Divide by Sheep is available on Steam and mobile markets, the price is representative of that fact at $4.99. This makes it an absolutely steal if you love puzzle games, plus hey, Steam achievements are always fun. You can always nab this game for on the go at $2.99 on the iTunes store. This game makes a great traveling companion. So if you are in the market for an incredibly adorable puzzle game that is going to give you plenty of bang for your buck and more than likely make you scratch your head, I can't think of a better game than Divide by Sheep.